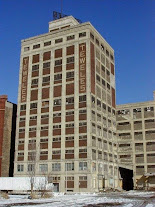 Teweles Seed Co building- hope to have a low relief version of this on the layout
A small interesting layout, easily transported to exhibitions in a Citroen Berlingo
An  HO scale American switching (shunting ) layout set in Milwaukee Wisconsin in the late 40’s and early 50’s DCC control with sound in some locos.

27th September 2014
GHOST LAYOUT?
In the Roundhouse – magazine of the British Region of the NMRA is a review of the Alton Ltd show held by GOFARS* last July. Warehouse District was due to be there but was unfortunately withdrawn 5 weeks or so before the exhibition  due to continuing wiring problems.
Obviously the organisers substituted another layout, but our withdrawal was too late to change the programme.
It therefore was quite a shock to see the following -“The HO layout Warehouse District is a first attempt in American by Tony Bettger and as such  is to be commended. I’m sure when the time comes he
make numerous changes on Mk 2?_
I wrote to the magazine, as however warranted the feint praise was, it was not Warehouse District the reviewer Richard Maxwell was looking at!
*GOFARS Guild of Fanatical American Railroaders
June 2019
No further progress.
October 2020
Layout under consideration as a home layout converted from exhibition type with change to complete front operation- ie repositioning “Fiddle Yard” to end on type. Legs & possibly canopy not required
February 2022
The layout will be mounted on top of existing shelving system, with Fiddle yard repositioned so that rear access is not required. Legs to be dispensed with but could be mounted on a table for exhibition purposes.